Sass is what CSS should be. It adds variables, nesting, mixins and more to regular CSS. 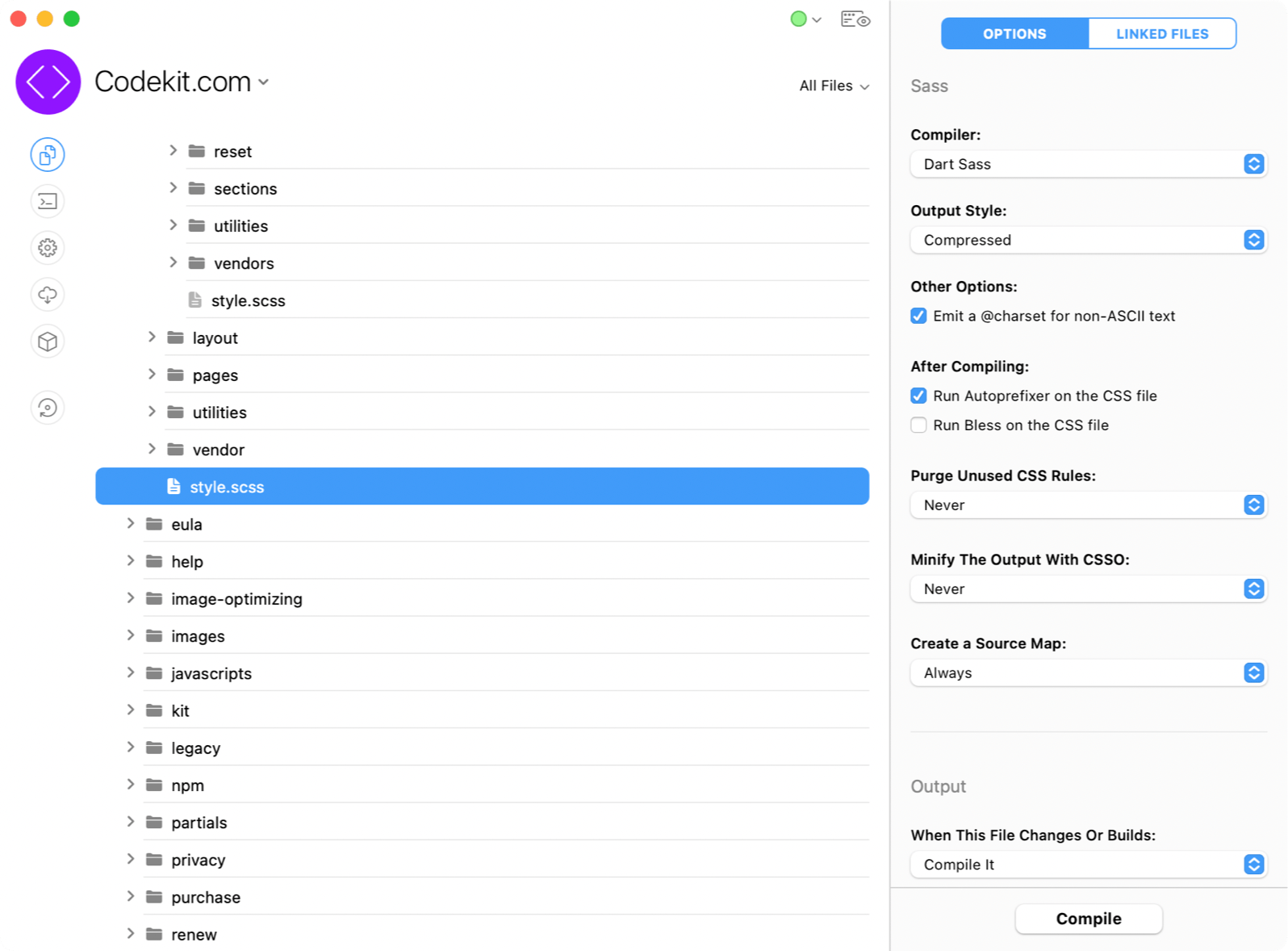 To set options for all Sass files in a project simultaneously, open Project Settings > Sass. To change options for just one file, select it and use the inspector pane shown above.

Why two? The official Sass compiler used to be written in Ruby, which was godawful slow. Libsass rewrote the compiler in C++ to solve that. Years later, the Sass folks dropped Ruby and moved to Dart, which is pretty quick. For backwards-compatibility, CodeKit makes both compilers available.

Choose Compressed for the smallest CSS files. The other options produce pretty-printed CSS, but you won't need that if you use source maps.

Note: Dart Sass supports only "compressed" and "expanded". If you choose one of the other styles and use Dart Sass, the closest match is used automatically.

If your compiled CSS contains non-ASCII text (characters that don't fit into one byte), this option will add a @charset declaration to the beginning of the CSS file to help browsers decode them correctly. It defaults to ON.

Note: this setting has no effect if you're using Libsass. 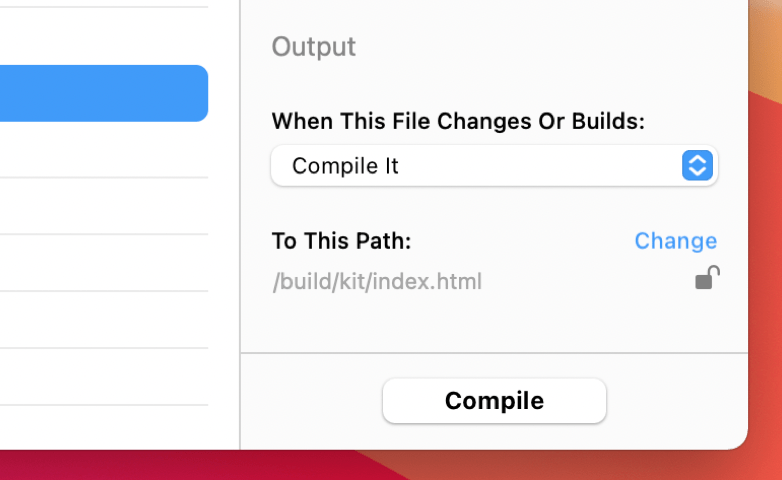 Sass files can import other files. To see these relationships, click the Linked Files tab: 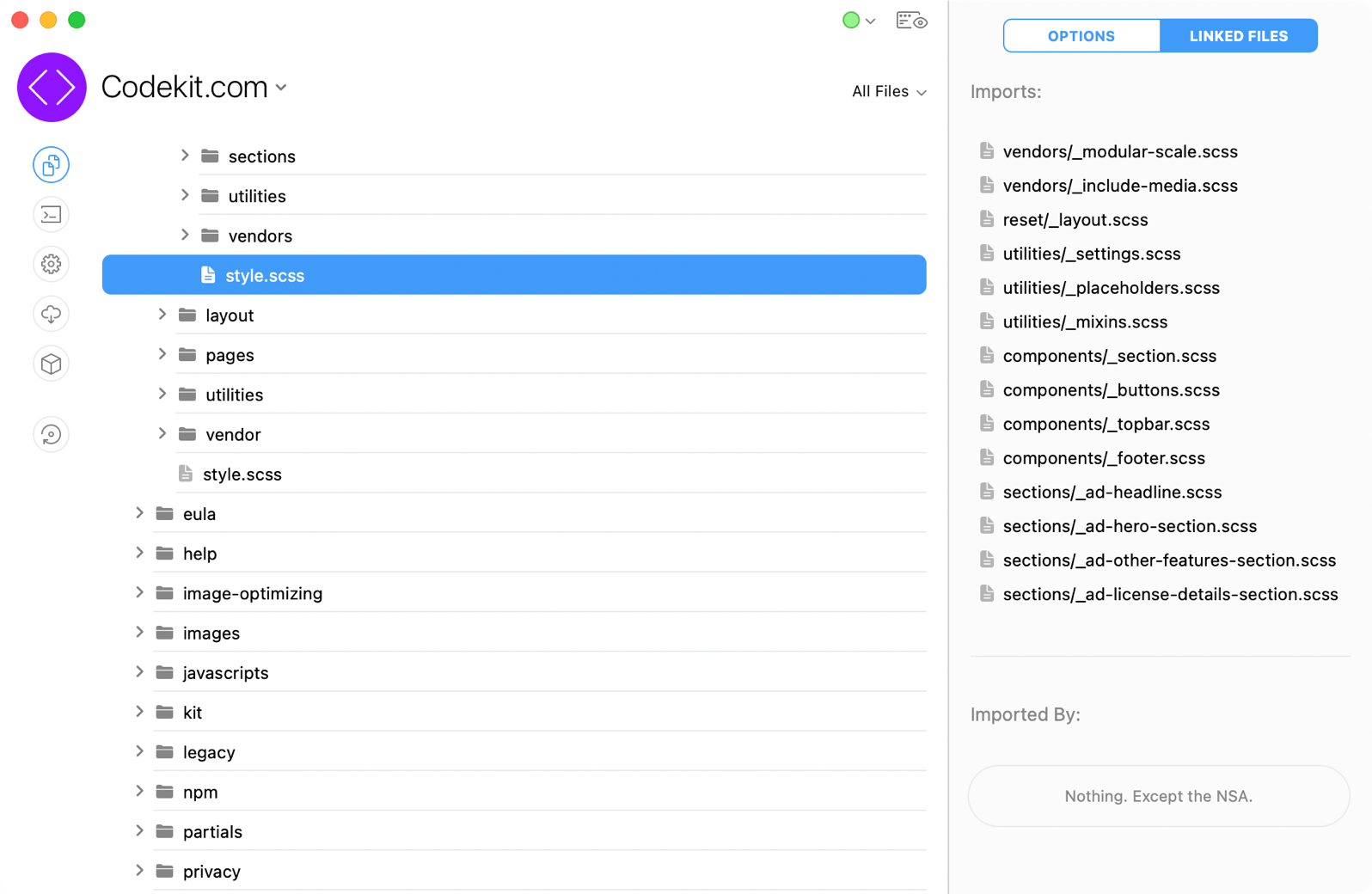 At the top, this pane shows all files that your selected Sass file imports. Below that are all the files that import the one you have selected. If you see [FW] after the filename, that file is part of a CodeKit Framework

Sass has a new module system that replaces @import with a new @use directive. CodeKit fully supports Sass modules when you use the Dart Sass compiler.

If you're migrating from @import statements, there are a few changes:

Note: This feature is available only when using the Libsass compiler.

CodeKit supports Sass "import globbing". If you write @import 'someFolder/*', all Sass files in someFolder will be imported in alphabetical order. You can also use multi-level globbing such as folder/**/*, which imports all Sass files in 'folder' and in any subfolders thereof.

For the time being, globbing is NOT suppported for @use or @forward statements, or when using the Dart Sass compiler.

Sass allows you to use variables in @import statements. However, doing so makes it impossible for CodeKit to determine links between your files. The variable is not resolved until the file is actually compiled and CodeKit does not compile while scanning for @import statements because that would be slow.

Sass allows you to import files without specifying the exact filename on disk. Suppose you have this Sass file:

To find the file that matches foo, CodeKit tries these paths, in order:

If no matching file is found, the app then checks each CodeKit Framework folder you have added, following the same ten steps. Note that the base file's extension (*.sass or *.scss) is always tried first.

As of April 2020, there are slight edge-case differences between Dart Sass and Libsass when resolving imports. You should not run into them, however.